Cappadocia, the land of beautiful horses 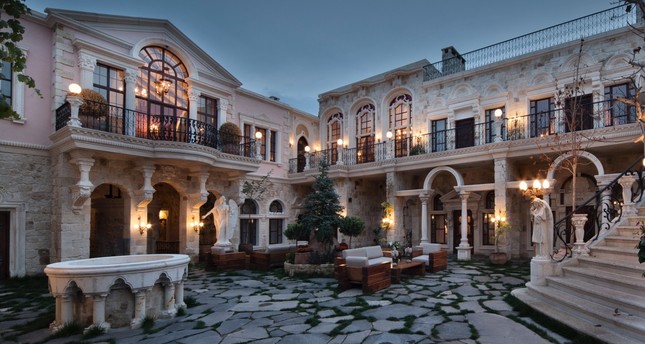 The Sacred House Boutique Hotel stands out due to its architecture and boutique services.

Popular with local and foreign tourists in every season, Cappadocia has been home to many civilizations throughout the centuries and continues to offer a fairy tale experience with the spectacular decoration and services of the Sacred Hotel

Having thousands of years of history, tourists from around the world swarm Cappadocia every year. This tourist region in the city of Nevşehir also often welcomes local students in addition to tourists. The region has been home to many civilizations such as the Hittites, Persians, Byzantines and Ottomans, all of which have left their mark. Cappadocia, which means the “land of fine horses” in old Persian, is famous for its fairy chimneys. The caves inside the fairy chimneys shed light on the history of civilizations past. These caves, some of which were cathedrals for the first Christians, especially attract Catholic and Orthodox tourists. These thousands of years old caves adorned with icons are truly fascinating.

It is difficult to choose the right hotel in such a touristy area. Among many hotels, one that stands out due to its architecture and boutique service is the Sacred House Boutique Hotel. The hotel has 21 rooms and is actually a 250-year-old Armenian mansion. It has a large backyard, stairs and an ostentatious door. As can be understood from its name, the hotel’s architecture is based on sacredness. Angel sculptures by architect Turan Gülcüoğlu are all around the hotel and each room has a different name. The most impressive one, I think, is the Archangel room. All the rooms have a fireplace, and in this one, on top of the fireplace is a giant Archangel sculpture holding a spear in one hand and fighting with the devil. The room has navy velvet sofas, curtains and bed covers and a large bathroom. Inside, there is a huge, antique bathtub made from one piece of marble. It is truly fantastic. Not having a TV in the rooms or in the whole hotel is definitely a good choice. The mystical atmosphere of the Sacred House does not get spoiled by the digital world. The fairy tale atmosphere continues all around. 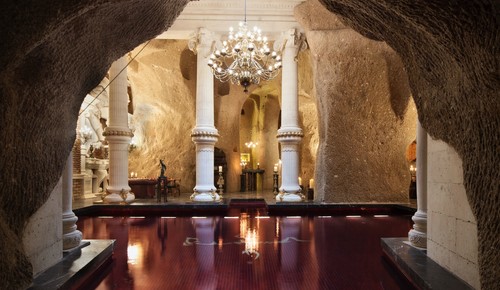 The pool, paved with red mosaics, gives the feeling of swimming in blood or fire, and was inspired by Dante’s Inferno.

The library in the hotel is another impressive area. There are even Dostoevsky books translated into Armenian in the hundreds of years old historical library. It is virtually like a museum with its high ceilings, stairs which is hung to the ceiling with chains and antique paintings. The restaurant with stairs leading to it is another concept in itself. An antique goblet collection is displayed at the bar. Even one of King Louie XIV’s wineglasses is in this collection. This are, which has icons and tombstones found in excavations in Cappadocia are hung on the walls, is ideal for socializing during the day. You can taste the Sacred House’s culinary offerings while seated at old dinner tables with silver cutlery. There is also a rich breakfast at the hotel. Silver cruet and napkin holders were chosen meticulously.

The homemade jams are especially delicious. The dinner menu is also very exclusive. Out of the starters, topik and kidney beans with cinnamon is a standout must. Of the main dishes, I definitely suggest the Armenian stew with black prunes and an Ottoman dish called “mutancala,” which is a chicken kebab with apricot and almonds. The service staff are quite professional and friendly. Everything is as cozy as a home. I congratulate chef Ali Zade for this culinary magic.

Another part of Sacred House that distinguishes it from others is its spa. The most vital spot of the spa, which is inspired by Dante’s Inferno, is its pool. This pool, paved with red mosaics gives the feeling of swimming in blood or fire. In the middle of the pool are two angels holding an inscription from William Blake that says: “If the doors of perception are cleansed everything would appear as it is.” In short, everywhere at the Sacred House Hotel is full of messages and a different set up. The pool has four giant pillars and is quite mystical and relaxing. The red Chesterfield sofas in front of the big fireplace create a special atmosphere. The chandeliers add even more of a mystical air to the atmosphere. And in addition to the massage rooms there is also a sauna and a Turkish bath. I suggest you experience this wonderful hotel at first chance. Thumbs up to hotel manager Volkan Uyanık’s detail-oriented approach. 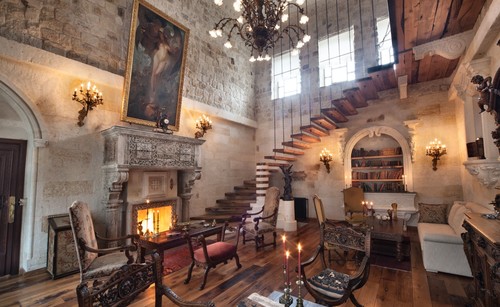 The library in the hotel is like a museum with high ceilings, stairs hung from the ceiling with chains and antique paintings.

While in Cappadocia, there are other things to do besides taking a hot air balloon ride and participating in a cooking class. First is to stop by Kadost Horse Farm, which offers enjoyable tours with the horses on the farm in the canyons between the fairy chimneys. There are one-hour tours as well as one-week camping tours. These tours in the canyons make you feel like you are in an old Western movie. If you can find the time, you can also go to places where you can watch wild horses wander freely in nature. In fact, I suggest you follow the Instagram page of photographer Hüseyin Taşkın for wonderful photographs of these horses. Another interesting activity is a video mapping show. The show runs every night in Zelve valley with visuals reflected on fairy chimneys from meters away from 14 projectors. It shows all the civilizations that have lived in Cappadocia, starting from the fairy chimneys. The videos, strengthened with sound and visual effects, is really a journey through the ages. My last suggestion is an alternative restaurant by Kızılırmak River called Sur Balık Avanos. The view, menu and service are excellent. The tables on the deck make you feel as if you are in a summer town restaurant. I suggest you visit Cappadocia before the summer heat, and do not be too late to see this land of fine horses.